Asal Uttar Battle in Khemkaran Sector of Punjab is a landmark battle of 1965 Indo-Pak War. This is the story of that battle.

Khem Karan is an Indian village just around 5 kms from the Indo-Pak border in Punjab and around 8 kms from the major Pakistani city of Kasur. The Pakistan Army pushed its 1 Armoured Division positioned at Kasur on the night of 8 September 1965 into Indian territory and captured the Khem Karan village. 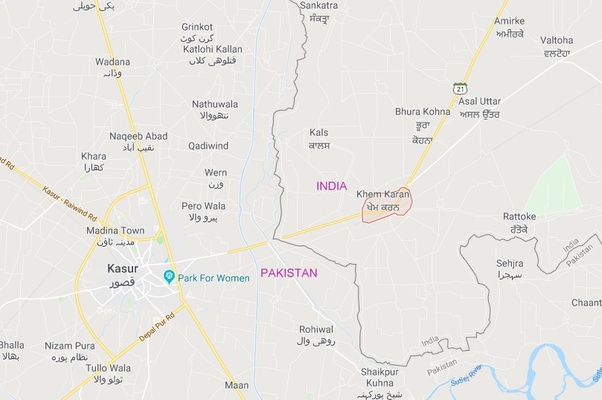 While Pakistan’s policy was of aggression; India’s was defensive; or Defensive Offence as Lt. Gen Gurbakh Singh put it.

Pakistan’s 1st Armoured Division was fiercely proud of its Patton Tanks, with advanced night-vision capabilities, freshly procured from America. No Indian tank was then a match to the Patton, not even Centurions.

As per the plans of Pakistan, Khem Karan was just a launching pad for an offensive towards the bridges at Harike and Beas. This was just the first step for Pakistan, as they thought! Pakistan was readying for a Fourth Battle at Panipat, which they intended to win. General Ayub Khan in fact boasted of dinner in Delhi Gymkhana..

The Pakistani offensive was to be launched in two phases. Phase 1 entailed 11 Infantry Division to establish a bridgehead across the obstacle system in the area of Khem Karan by first light D plus1. In Phase 2, 1 Armoured Division was to break out from the bridgehead in three axes. The first was by 4 Armoured Brigade with two armoured regiments and a motorised infantry battalion along ValtohaFatehabad and then astride the Sobraon branch canal, to capture the bridges of the Beas. The second axis was 3 Armoured Brigade with two armoured regiments and an infantry battalion along Khem Karan-Bhikkiwind-Taran Taran astride Kasur branch canal, to capture Jandiala Guru as also cut off the Grand Trunk road.

In his book In the Line of Duty: A Soldier Remembers, General Harbakhsh has written: ‘Late at night on the 9th of September, the chief of the army staff rang me up… his advice was that to save the whole army from being cut-off by Pakistan’s armour push, I should pull back to the line of the Beas river. Pulling back to the Beas would have meant sacrificing prime territory in Punjab including Amritsar and Gurdaspur districts and would have been a far worse defeat than that suffered at the hands of the Chinese in 1962.‘

The counter-attack by Indian forces is today considered a landmark tank battle ever in world history. Indian forces were commanded as under:

The Indians decided to breach the nearby Nullah (water stream) and distributory canals to flood the area to the south and southwest of the sector. Hence, little room was left for the Pakistani tanks to manouvre. Their tanks would grind to a halt in the slush. Moreover, they were forced to pass through standing sugarcane fields, where the movement of the sugarcanes would disclose the location and Indians would shatter them out of the ground.

On 10th September, the third day of the battle, situation is illustrated by the following wireless chatter:

Maj Gen.Nasir Ahmed Khan,Commander of 1 Armoured Division of Pakistan (GOC) watching the disintegration of his division from the air in a helicopter spoke directly to the 4th armoured Brigade Commander (BC);

BC: ‘It’s not possible for us to advance any further due to stiff resistance. Heavy enemy shelling has completely pinned us down.’
GOC: ‘It is most important that the advance is continued. Therefore, in the name of Islam, Pakistan and Hillale Jurat, I command you get up and go forward.’
BC: ‘I will do my best but as things are I do not know how the hell I am going to do that. This bloody enemy artillery is knocking the hell out of us and I am afraid at the moment that I can’t do any better then this.’
GOC: ‘Move forward to your objectives forthwith.’
BC: ‘I cannot move; Indians are ahead of me.’
GOC: ‘Come and see me immediately.’
BC: ‘Where do I come? I don’t know.’
GOC: ‘Move straight on and turn right.’
BC: ‘Do you know where I am? If I turn left the Indians get me, if I turn right the artillery gets me. Where do I come and how?’
GOC: ‘Turn right till you hit the road, follow it and you will find me at milpost 36.’

Maj Gen Nasir Ahmed Khan in fact, came down to meet his troops, and was killed in action.

Considering the situation, GOC Indian 4th Mountain Division (Maj. Gen. Gurbaksh Singh) removed to back off to Beas but decided to hold on. He ordered the division to fall back and assume a horseshoe shaped defensive position with Asal Uttar as its focal point. The battle strategy was the brainchild of Brigadier Thomas K.Theograj (2nd Independent Armored Brigade).

The Indian tanks adopted a Horse-Shoe defence; bogging down the attackers in flooded fields; forcing them to go through Sugar-Cane fields and surrounding them from all sides. 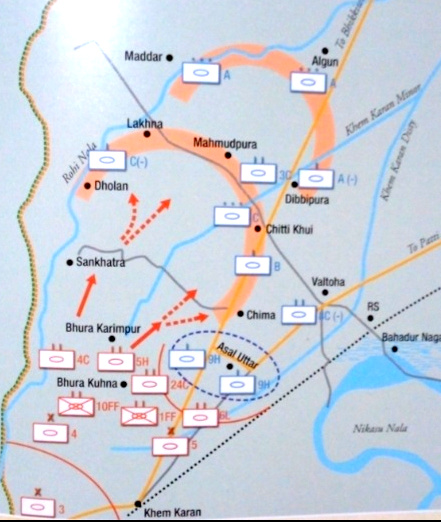 In the morning of 11th September 1965, the Indian tanks closed in from all sides, Pakistani tanks were bogged down and surrounded from all sides. The swampy ground slowed down the advance of the Pakistani tanks and many of them could not move because of the muddy slush. Under fire, Pakistani crewmen and infantry broke, abandoned their vehicles and fled, the trap was strung. 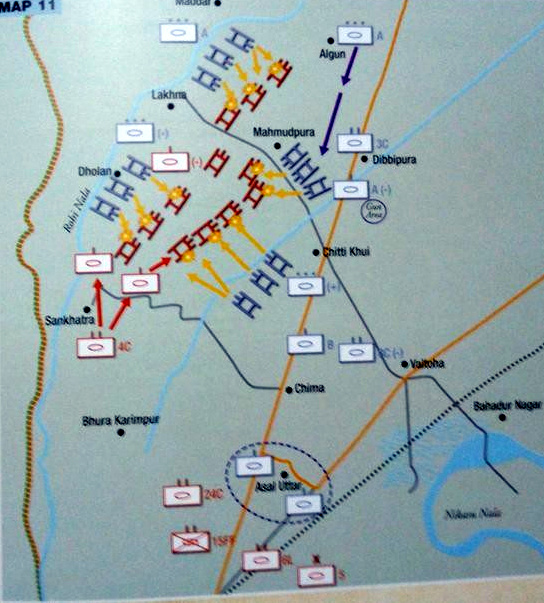 99 Pakistani tanks mostly Pattons, and a few Shermans and Chaffees, were destroyed or captured.

Equivalent of 2 armoured regiments were wiped off the Pakistani order of battle -with 4 cavalry being physically wiped out as a formation.The Pakistani dream of capturing Punjab with a Fourth Panipat was shattered ,rather in a reverse Panipat its elite strike formation was defeated and Pakistan lost the initiative in the Battle and the War at large.

The Asal Uttar is thus the graveyard of around 100 Pakistani Tanks. 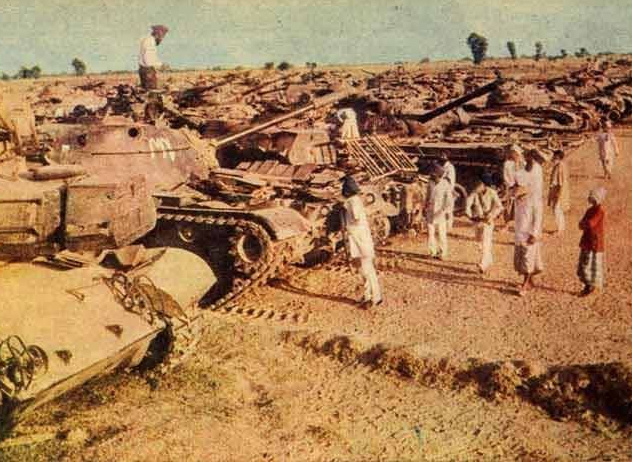 Abdul Hameed of the Grenadiers single-handedly in his open jeep destroyed 3 tanks and died while attacking the 4th; looking the tank into the eye. He got Param Veer Chakra for the gallantry.

Many Indians died, but India gave the Asal Uttar. Asal Uttar – the name of the village turned out justifying it’s name; the name meaning ‘The real answer’… Such a wonderful answer India gave!

The place where all those Pattons were defeated is called Patton Nagar.

The town of Khemkaran however remained under Pakistani occupation till the Tashkent Agreement came into force, despite attempts by the Indian Army to retake the town. An attack mounted by the Indian Army in the dying hours of the war failed and Lt Col Anant Singh, Commanding Officer of 4 Sikh, and his troops were captured by the Pakistan Army. It came back to India after the Tashkent Agreement, when both sides went to their pre-war positions.

Mussharraf, who later became President of Pakistan was amongst the ones who were bogged down and ran away. He never forgot the humiliation of having run from that battle with his pants on fire literally.

For me, the take away is this: The joint courage of a secular India – Sikhs, Hindus, Muslims, Parsis and Christians was too much for a singular army of an Islamic Pakistan. Brig. Theograj, Sepoy Abdul Hamid, Maj Gen. Gurbaksh, General Harbaksh, Lt. Col. AB Tarapore and of course Lt. Col. C R Jesus (though a Brahmin named after Jesus in the true spirit of this great nation) .