Hindu Rashtra! What about Sikhs?

So, an RSS friend asked me, what is wrong in having a Hindu Rashtra; what is the big deal!

My answer is this:

As a Sikh, I don’t want to be a second grade citizen in a country which has been created with blood of my community; and I am pretty sure that if these people continue this propaganda, India can’t survive for long in the current borders.

The people who ask for a Hindu Rashtra today, the Jan Sangh acolytes NEVER EVER talked of independence or Swaraj from British, their Savarkar begged the British for mercy when hundreds of Sikhs were sweating it out there and being hung on their necks. Here, I am not ranting against Hindus in general, let me emphasise, this is in response to those who think it is their God given right to make other citizens second grade.

Now that they have got swaraj on a platter due to sacrifices of others, they claim to subjugate a community that has given much more than their ideology ever has.

ISSUE IS THIS: converting India into a Hindu Rashtra would stab the Sikhs in the back, the people who joined India out of choice; not because they didnt have anywhere else to go; they could have asked for a separate country then. And not to forget that Sikhs contributed the MOST to India’s independence struggle; yes, the MOST given their low population percentage, and this I say with facts. Counter the facts, if one can, with facts.

DURING THE FREEDOM STRUGGLE, WHEN SAVARKAR WAS BEGGING FOR MERCY, THIS IS WHAT THE SIKHS WERE DOING.

1824, Talpedar Vijay Singh of Kunja in Roorkee leads in the mutiny of army. 211 sikh armymen killed in gun fire, 18 were hanged.

1869 – 65 Namdhari Sikhs tied with the barrels of cannons and blown to bits.

1882 – Ludhiana. Attempt to occupy artillery depot outside. 42 sikhs were martyred.

1907 – Agitation launched against the Punjab Colonisation Act, 1907. Sardar Ajit Singh (Bhagat Singh’s Uncle) was a prominent leader of this movement. He along with Lala Lajpat Rai was expelled from the country and imprisoned in Mandalay in Burma. After his release, Ajit Singh went to Canada and joined the Ghadar Party..

1913 – The Ghadar Party pioneered the armed freedom struggle, most of them being Sikhs. The Ghadar Party continued to inject revolutionaries into Indian politics. It is said, out of 8000 returnees from World-War during 1914-18, the Government of India interned 5000 and restricted the movements of another 2500. Among the 194 men taken into custody 180 were Punjabis. Most of them were Sikhs. They were charged with treason. As many as 12 were hanged. Some of the were imprisoned for life. Others were transported. And the rest were given various terms of imprisonment. This was the birth of the Azad Hind Fauz idea.

1914-1915. In Lahore central jail, 18 patriots belonging to Babbar and Gaderites were hanged. Life imprisonment of 28 sikhs.

5 Brave Sikhs were hanged in ‘Lahore supplementary case’. 91 got life imprisonment out of which 90 were Sikhs. 50 Indians got other sentences, out of which 49 were Sikhs.

1931 – Some freedom fighters were being sent to Andaman. Sardar Rattan Singh and his companions tried to freed them. Got arrested. Given capital punishment.

MAJOR SIKH FREEDOM FIGHTERS – It would be futile to list Sikh freedom fighters in entirety. Too many of them went to the gallows, too many went to Andaman Nicobar Cellular Jail and died there. And the fact that they went to their destiny with pride in their eyes. I would however list just a few, for details kindly visit the links provided against their names.

WHEN SAVARKAR WAS BEGGING FOR MERCY, MAJOR SIKH FREEDOM FIGHTERS INCARCERATED IN CELLULAR JAIL WERE (1909-1938) 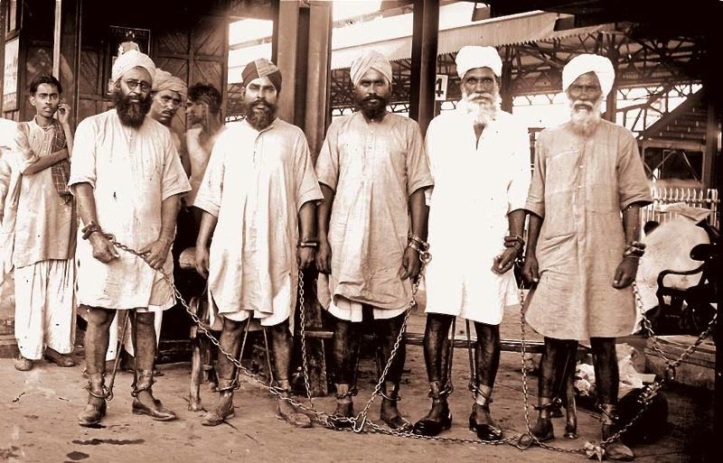