Satwant Singh and Beant Singh, the killers of Indira Gandhi: both of them surrendered after shooting down Indira Gandhi.

Satwant Singh faced a trial and was hanged for his crime in 1989, five years after the killing. Kehar Singh, a supposed accomplice was hanged purely on circumstantial evidence. But that is not the story, the story is about what happened to Beant Singh after he surrendered.

Beant Singh, who was the senior one amongst the two, was shot down in the security-men cabin after he surrendered; purportedly by two commandos of the Indo Tibetan Border Police (ITBP). 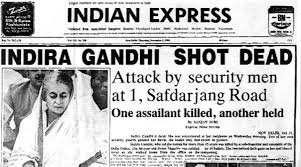 Why was Beant Singh shot down when he had already surrendered?

The answer to this question may lie in recommendations of the Justice Thakkar Commission which looked into the circumstances of Indira Gandhi’s Assassination and this is what India Today said about it in 1986[1] :

… In the reconstructions of the hazy sequence of events on the morning of October 31, the commission has unearthed a startling find. It seems that on that fateful morning, Mrs Gandhi’s proposed interview with Peter Ustinov was delayed by half-an-hour for apparently inexplicable reasons. This crucial 30-minute period coincided with a hurried visit to the toilet by both Beant Singh and Satwant Singh. “That could have been out of a bout of nerves or to sort out some last-minute detail of coordination,” said a commission official. But from this the judge has inferred that, but for the last-minute change in the prime minister’s schedule, she could have safely walked past the gate for her interview with Ustinov, with her would-be assassins locked up in the toilet.

It is apparent that the commission is not prepared to blame this entirely on providence and it is this factor which compelled the commission to search hard for likely accomplices of the assassins within the inner sanctum of 1, Safdarjang Road with the burden of suspicion inevitably falling on R.K. Dhawan, the powerful personal aide who had accompanied Mrs Gandhi through a decade of fluctuating fortunes.

Justice Thakkar, in his 312-page final report to the government on February 27, 1986, recommended that the

“Central government should seriously consider the question of appropriate agencies to investigate the matter as regards the involvement of R.K. Dhawan, the then special assistant to the former prime minister” in the crime[2] .

“There are reasonable grounds to suspect the involvement of R.K. Dhawan, the then special assistant to the late PM, in the crime.“

“Taking into account an overall view of the matter, the conclusion which inevitably follows is that Dhawan has been telling a lie on this point and that he has something to hide, which leads to the further inference that it has some sinister significance and is an indicator of his complicity in the crime.”

Oh, and I almost forgot to mention this: Satwant Singh was hanged before he could provide official witness statements for the killing of Beant Singh by the two ITBF commandos.

Two Indo-Tibet Border Police commandos had opened fire killing Beant Singh on the spot and injuring Satwant Singh immediately after the attack on Indira Gandhi. He (Advocate of Satwant Singh – Sodhi) only wanted the execution to be stayed till his evidence against the commandos was recorded[3] .

No one ever came to know why Beant Singh was shot down after he surrendered. It will be an enduring mystery of our times.